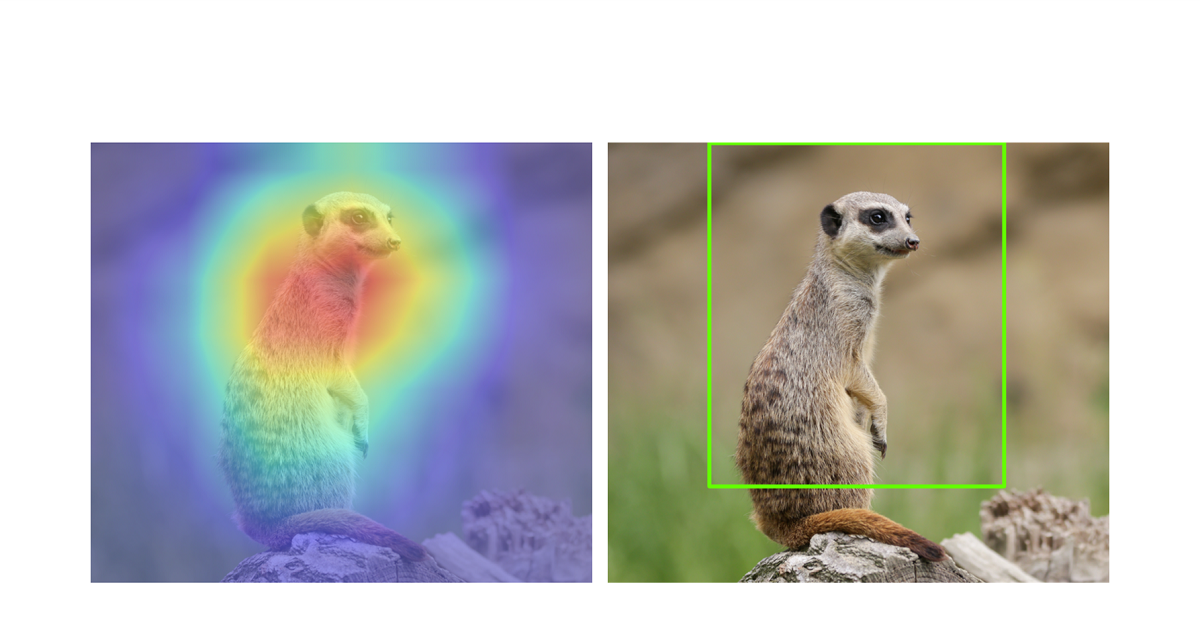 A method to visualize internal representations of a convolutional neural network and perform object localization without bounding box annotations.

For a university project we investigated the question of where a deep convolutional neural network (CNN) looks, when classifying emotions. For this purpose, we evaluated three visualization methods for CNNs, one of which, the simplest, I would like to share in this post.

The method is called Class Activation Mapping and was introduced in the paper Learning Deep Features for Discriminative Localization by Zhou et al. (2016) [5]. Besides proposing a method to visualize the discriminative regions of a classification-trained convolutional neural network (CNN), the authors also use this method to localize objects without providing the model with any bounding box annotations. The model just learns the classification task with class labels and is then able to localize the object of a specific class in an image. The result can look like this:

In this post I will first introduce the approach and then present a simple implementation of it in Tensorflow.

When training a CNN several filters are learned for convolution operations and each filter application results in a feature map. Filters close to the input layer of a CNN are often detecting low-level features, such as edges or lines. The deeper you go, the more are those low-level features combined into higher level features.

Taking a network where the last convolutional layer is right before the classification layer (softmax), the feature maps can even correspond to objects that are classified with the CNN [5]. For example, let’s take any neural network that is able to classify a person, as well as a dog. The figure below displays such a network with corresponding activations of the feature maps of the last convolutional layer.

The authors of [5] even increased the interpretability of the feature maps, as the number of feature maps of the last convolutional layer in their network was equal to the number of classes. Hence, each feature map could be interpreted as confidence map for a specific class. The strongest activation of a class specific feature map was then roughly at the same region as the object was in the original image.

Some recent CNNs, such as the Network in Network [1] or members of the GoogLeNet [3, 4] family, therefore try to avoid the use of FC layers. Instead of flattening the input, [1] proposed to use global average pooling, which maintains the correspondence and keeps the localization ability of the network.

feature maps and creates a vector with

scalar values, each representing the mean activation of a feature map.

The resulting vector can then be fed into a classification (softmax) layer, so that the activation of a specific class output

For an illustrative example, let’s assume that we are interested in finding a dog in an image. The activation for the classification layer with respect to the class dog is

are the weights for the global average of feature map

with respect to the class

are the feature maps of the last conv layer.

When feeding an image of a dog in the network, the convolutions in the last convolutional layer detect some concepts belonging to the class dog, for example, the ears and the body. The feature maps that are responsible for detecting those concepts will have a high activation, and hence, also the spatial averages

of those feature maps will be high.

indicate the importance of feature map

. For the dog example this means, that weights combining the concepts (feature maps) belonging to the class dog, might have a higher value than weights that are associated with feature maps that do detect other concepts, that are not important for the class dog.

The result of the linear combination of weights and feature maps is called Class Activation Map (CAM) and perfectly highlights the regions of an image that are important for discrimination. Loosely speaking, you can say that it indicates where the network is looking when predicting a certain class. Mathematically this is defined as

being the activation of pixel

, which is the linear combination of the weights

for each feature map multiplied by the pixel

in each feature map. Hence, the CAM is just a weighted linear sum of the presence of specific visual patterns at different spatial locations.

To further understand the concept, we will implement the method in simple python code.

As the use of Class Activation Maps proposed by this paper is restricted to networks with global average pooling layers directly before the softmax classification layer, I will use the InceptionV3 network [4] which is a revised version of the GoogLeNet network.

The image for classification is the following, which I just downloaded from the internet.

), therefore we need to resize it. Furthermore, we need to make a batch out of it (expand the dimensions so that is has shape (1, 299, 299, 3)) and preprocess it. The tensorflow inception module provides us a function for that, which converts the images from RGB to BGR and then zero-centers each color channel with respect to the ImageNet dataset.

Let’s see what the model predicts for our image.

We can see that the model is able to correctly classify the image. So now let’s go to the actual CAM algorithm.

The general steps to obtain the Class Activation Map (CAM) are as follows:

For the first step we have to take a look at the model summary to identify the name of the layer that is directly before the global average pooling layer.

From the output we can see that the layer we are searching for is called mixed10. With that information we can build a new model that, besides outputting the classification, also gives us the activations of the feature maps for a specific input image.

When we now feed the image in the altered model, we get both, the feature maps, as well as the prediction.

The last convolutional operation outputs 2048 feature maps, each with a size of

. Next, we need to get the weights connecting the GlobalAveragePooling layer with the softmax classification layer. For now we are only interested in the weights for the winning class. Hence, we need to find the index of the class with highest confidence.

The weights matrix has shape

is the number of classes the model is able to predict.

As expected, the weight vector has exactly the same number of rows, as we have feature maps in the last layer. So for each feature map we have one corresponding weight. With the notion of feature maps as concept learners, we could say that each weight determines how important the specific concept is for the output/class.

Now we only need to scale each feature map with the corresponding weight. For example, for feature map

, we multiply each pixel with the scalar value

We could write that in really simple python code:

However, this method is quite slow. A faster and nicer way is to use numpy’s functionality of multiplying matrices.

When plotting the result we get the following heatmap:

This looks quite good so far! However, this heatmap is really small, as it only has the dimensions of the feature maps in the last conv layer (

). To nicely plot it and compare it to our input image, we need to upscale the Class Activation Map to the size of our image.

Plotting the heatmap and the original image size by side we get:

Now if we superimpose the heatmap over the image, we get a pretty good visualization of the regions that are important for the network to identify the meerkat.

In order to perform localization and generate a bounding box for the class, the authors propose a simple thresholding technique [5]. They first segment the regions where the value is above 20% of the max value of the Class Activation Map and then take the bounding box that covers the largest connected component in the segmentation map.

That’s how the visualization of discriminative regions and weakly-supervised localization works with Class Activation Mapping. 🙂

Class Activation Maps are a useful tool to visualize class-discriminative regions of a deep convolutional neural network. With simple techniques one can obtain a heatmap for these regions and furthermore, use this heatmap to localize an object and draw a bounding box around it. Hence, the method allows to learn an object localization task solely by using class labels instead of bounding box annotations.

However, the Class Activation Mapping approach is quite limited in the sense, that it can only be applied to models having a certain architecture. The model needs to have a global average pooling layer right after the last convolutional layer, followed by the classification layer. A newer and more flexible approach, called GradCAM [2] overcomes this limitation by using gradients flowing back from the classification output to the feature maps of the last convolutional layer. This makes the approach somehow independent of the architecture and allows the application to most neural network architectures. In some future post I am planning to write about GradCAM as well. 🙂

Lastly, I would like to show a small result of our university project. We trained several CNNs on different datasets for emotion recognition and then evaluated different visualization techniques to find out what regions are important to recognize a certain emotion. This is one result we obtained with CAM:

It seems like the laugh lines play a special role in classifying happy people. 😉

If you have any comments or questions, feel free to leave a reply below or write an email. The code to this post can be found on my github.

Comments are closed, but trackbacks and pingbacks are open.