Intuitive Explanation of the Kullback-Leibler Divergence

One of the main goals of information theory is to quantify the information content of data, or in other words, how surprising an event is. For example, consider an unfair coin that lands heads up in 95% of the time. You wouldn’t be surprised if heads are up on a throw. In contrast, you would be very surprised if tails is up.

This intuition, where an unlikely event is more informative than a likely event, is formalized in the Self-Information or Shannon-Information

which can be rewritten to

So for our coin example, the probability of heads coming up is

, whereas the probability of tails coming up is

. When calculating the Self-Information for both, we can clearly see that the outcome tails is way more surprising than the outcome heads

However, usually we are not interested in the surprise of a particular event, but on the surprise we can expect on average for a whole probability distribution. This is where the entropy comes into place.

One important aspect here is the choice of the logarithm. If it is base 2, the unit of the entropy is in bits. With this in mind, entropy can also be explained as the minimum number of bits (or yes-no-questions) needed, on average, to encode our data.

Consider a fair coin, where each value is equally likely (

). The entropy of one toss would be 1. This indicates, that we need one bit, and thus, one yes-no-question, to encode the data (the bit is either turned on or off).

) each with equal probability

. How many yes-no-questions do we need? Calculating the entropy gives us

For a better intuition of this notion of entropy, let’s assume a dataset which contains several objects, each belonging to one of two classes. The frequency of class 1 objects can be denoted with the parameter

. In simple terms, if the dataset contains 100 objects and

Note: For those of you who are familiar with machine learning, this equation should already be well-known, as it is nothing more than the binary cross-entropy loss.

Plotting this equation results in the following function:

This plot further visualizes what we’ve discussed so far. If all objects of the dataset belong to only one class (

) the entropy or disorder of the dataset equals zero. This means loosely spoken, there is “no disorder” in the dataset.

However, if we are dealing with a balanced dataset (

), the “disorder” is maximal with

Note: I have taken a dataset for the example here to illustrate the concept of “disorder”. However, this example can also be rewritten so that it represents the outcome of a Bernoulli random variable with binary outcome: success

. This would be more appropriate in terms of entropy being a measure of uncertainty of an outcome, with higher entropy indicating higher uncertainty.

over the same random variable

, the Kullback-Leibler Divergence is defined as

which can be rewritten to

For a discrete random variable, the KL divergence is the extra amount bits needed to encode samples from

using a code that was designed for samples drawn from

For a more intuitive understanding, let’s take the coin example again. Consider a fair coin with equal probability for heads and tails coming up

Let’s clarify it further with an example, where we draw a sample sequence from the fair coin distribution by tossing the fair coin 10 times. This could generate a sequence like

The probability of getting this sequence given the fair coin is

as a measure for similarity. Expressing this in a more formal way with

for the fair coin and

for the biased coin gives us

By applying logarithm rules we can refine this equation 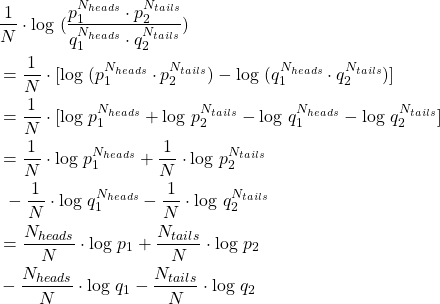 and the proportion of tails coming up

Rearranging this equation gives us

which is equivalent to the discrete Kullback-Leibler Divergence

Finally I would like to calculate the Kullback-Leibler Divergence for a small toy example. Assume we conducted a survey where we asked 100 persons how many plants they have in their living room. The empirical probability distribution is

How much information would we lose if we approximate this empirical distribution with a uniform distribution where each outcome is equally likely?

We can calculate that by using the KL divergence with

equal to the normalized expectation of our empirical distribution?

Again, calculating the Kullback-Leibler divergence with

being the binomial distribution gives us:

However, one drawback of the Kullback-Leibler divergence is that it is not a metric, since

(not symmetric). If a symmetric measurement is preferred, I would recommend to read more about the Jensen-Shannon divergence which is bound to values between 0 and 1.

If you have any comments, feel free to leave a comment below or write a short message. 🙂

Comments are closed, but trackbacks and pingbacks are open.